There is so much to say about Tourmalines. Firstly it is my favorite gem. My first Tourmaline was a rare Paraiba Tourmaline which I gave away to a friend in need many years ago back when I stilled lived in Germany. I love Tourmalines because of the variety of colors they come. Many countries bear Tourmaline mines where this stone is found in combination with other minerals such as Quartz, Mica, Lepidolite. The name Tourmaline means “mixed gems” in Sinhalese (Sri Lanka) and the majority can be found in Afghanistan, Russia, Burma, the United States (California and Maine), and Madagascar.

Tourmaline is a crystalline boron silicate mineral and it contains elements such as Aluminum, Iron, Magnesium, Sodium, Lithium, or Potassium. The Tourmaline mineral group is chemically one of the most complicated groups of silicate minerals and its chemical formula is XY3Z6(T6O18)(BO3)3V3W
It is pretty hard and durable and thus very well suited for jewelry. It is a so-called pyroelectric mineral, meaning that when warmed, it attracts dust and other lightweight particles.

Tourmaline is classified as a semi-precious stone and does come in a wide variety of colors from clear to black. These colors have many different causes. Iron-rich tourmalines are black to bluish-black to deep brown, while magnesium-rich varieties are brown to yellow. Lithium-rich tourmalines can have a lot of other colors like blue, green, red, yellow, or pink. Bi-colored and multicolored crystals are common and in high demand as they are reflecting variations of fluid chemistry during crystallization. Crystals may be green at one end and pink at the other, blue at one end and green on the other. The most beloved Watermelon Tourmaline is green on the outside and pink inside. Some forms of Tourmaline are dichroic; they change color when viewed from different directions.

Much can be said about the Metaphysical properties of Tourmalines and all its varieties. What may be more interesting is why I use so much of this gem in our Energy Empowered Jewelry. To me Tourmalines bring structure without interfering to what already is. It empowers and amplifies, adds an element or quality without needing to change anything. In my opinion and experience Tourmalines are yielding, joyful, regal, beautiful and gentle. They add rather than overtake or replace. Their colors have purity and glow and their structure resembles growth. 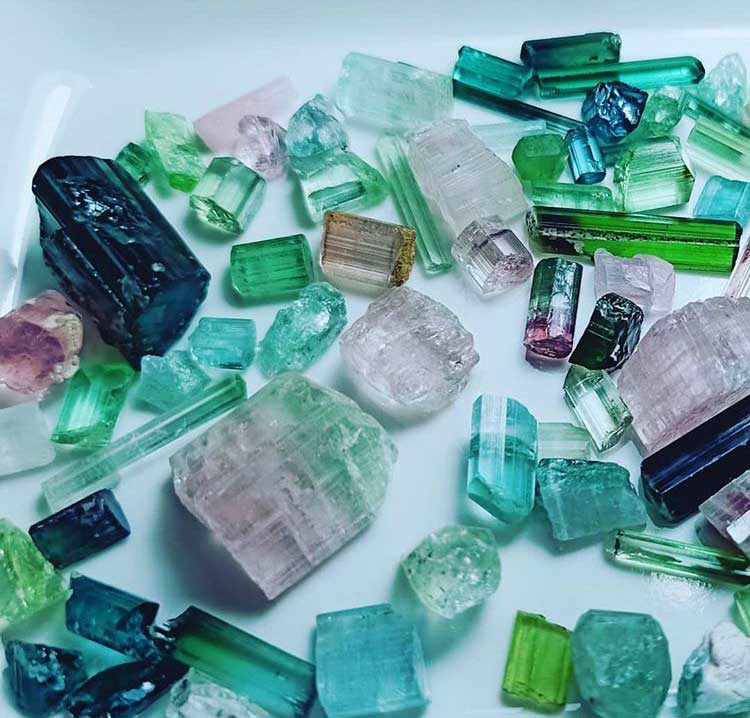 
Schorl and Albite from Afghanistan.

Black Tourmaline is the most common Tourmaline as it may account for over 90% of all Tourmalines found on Earth. 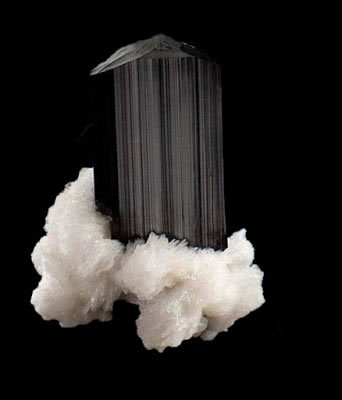 Elbaite is the most well-known and valuable form of the multicolored Tourmalines. 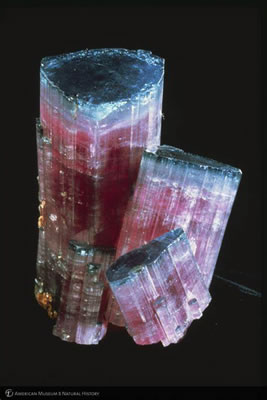 Liddicoatite Tourmaline from Madagascar
On display at The Kristallmuseum in Riedenburg, Germany
Photo Credit : Dusted77

Qualities: “Getting to deeper cause within, bringing light, sending energy into a direction, very powerful companion”. 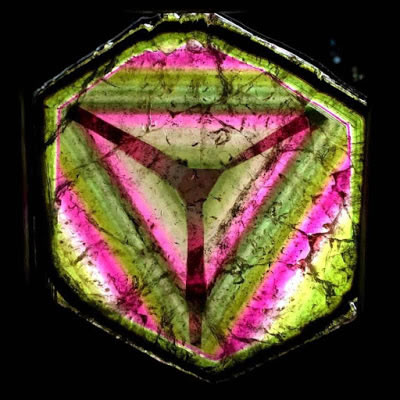 Qualities: “Deep acceptance of oneself, moving on, self-esteem, soothing” 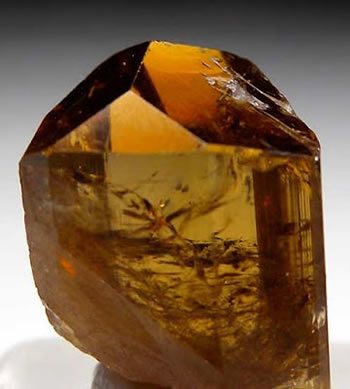 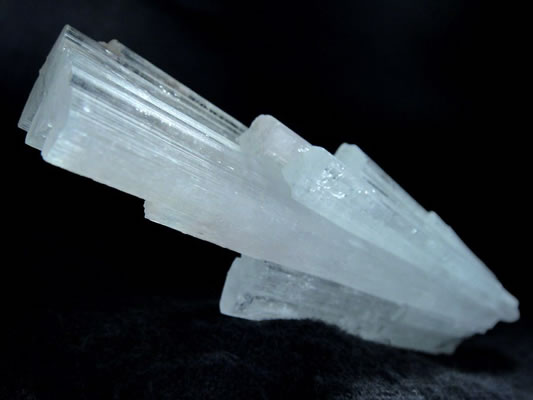 Red Tourmaline, the color is due to iron and manganese. 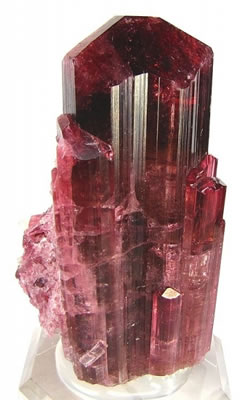 Blue Tourmaline, color due to iron. 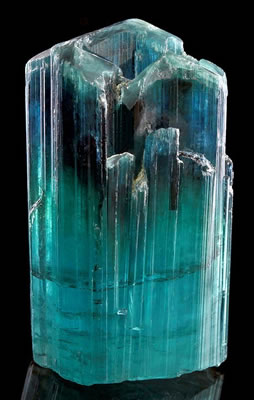 Green Tourmaline, color due to iron. 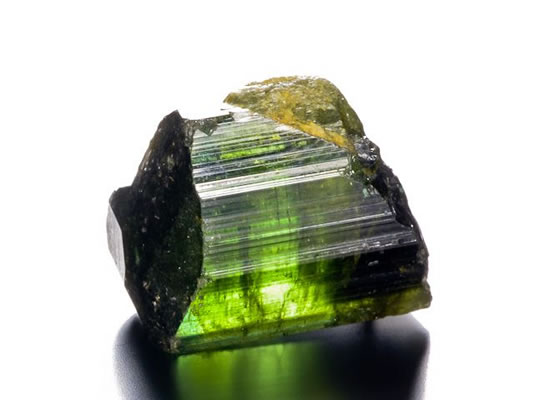 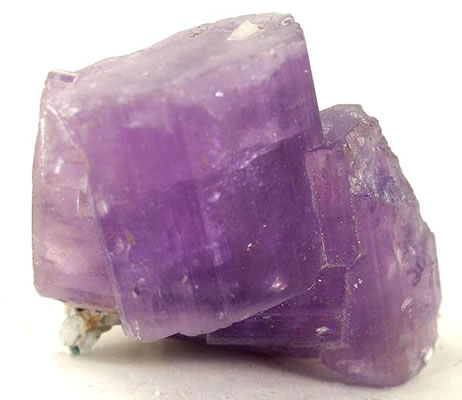 Watermelon Tourmaline with a pink core and its green edges 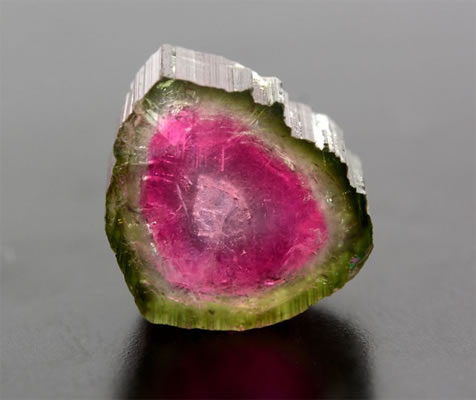 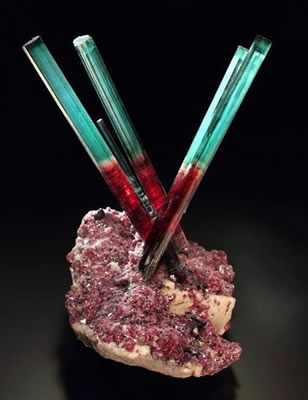 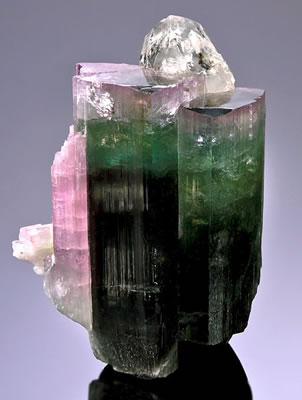 Neon blue colored Elbaite tourmaline from Brazil, color due to copper and manganese.

Qualities: “Awakening of gifts and talents, a vision for the future, gives vitalitiy”. 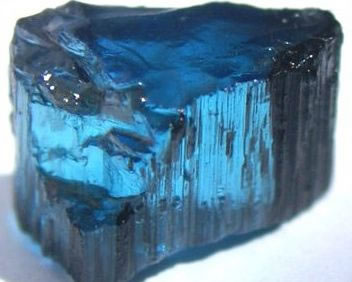